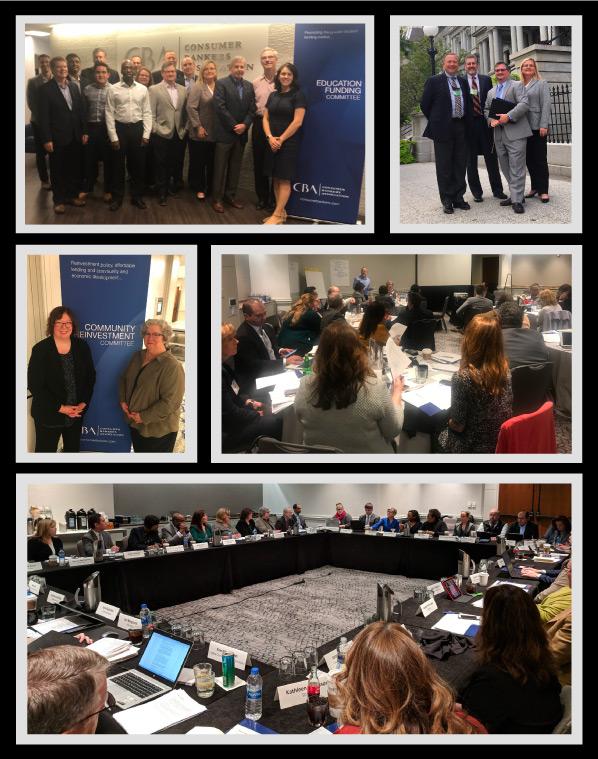 Another Hurricane Hits the Coast: The CBA Team extends our thoughts and prayers to any and all affected residents as well as Member banks in Florida, Alabama, Georgia and the other southern states facing the wind, rain and waves resulting from this storm.

OCC’s Joseph Otting to Speak at CBA LIVE 2019: Our first speaker has been announced for CBA LIVE 2019 – The Comptroller of the Currency Joseph Otting is set to speak on Wednesday, April 3, 2019. You won’t want to miss it! Register TODAY here.

Third-Quarter Earnings Report: JPMorgan Chase & Co., Citigroup Inc., Wells Fargo and PNC Bank started us off this morning with a report on their third-quarter earnings. In addition to reading the Dallas Cowboys football website every day, I do take a close look at our bank’s earnings reports.

Education Funding: On Tuesday, the Education Funding committee met with a multitude of Congressional staff members on Capitol Hill to discuss Higher Education Act (HEA) reauthorization and regulatory issues affecting the private student loan market. Committee members also met with Mark Calabria, the chief economist for Vice President Pence, and representatives at the U.S. Treasury Department. Both were interested in knowing what percentage of current federal originations the private marketplace could serve.

On Wednesday, they held their in-person meeting at CBA HQ. Committee Chair John Vidovich of Discover welcomed all members and set the agenda for the day. The committee heard from Assistant Director of Consumer Lending, Reporting and Collections Markets John McNamara and Student Lending Program Manager Patricia Scherschel of the Bureau of Consumer Financial Protection about the education financing market for the Bureau. Members were able to ask about the Bureau’s complaint database and how, in the past, press releases have been used to paint a misleading narrative about the industry.

Community Reinvestment: CBA’s Community Reinvestment Committee is the leading industry voice on CRA policy and they have been hard at work over the last year. While they hold near weekly conference calls to discuss CRA modernization efforts, this week, more than 30 committee members met in D.C. for two days of in-person meetings.

We kicked off on Thursday with a presentation from a former committee member, Lynn Woosley of Treliant Risk Advisors, before jumping into an in-depth discussion with OCC officials about our upcoming comment letter responding to the OCC’s CRA ANPR. The discussion centered around metrics, assessment areas, service test, CRA activities and products as well as reporting requirements.

As always, our committees discussed their forum focuses for CBA LIVE. I cannot wait to see what they have planned for CBA LIVE 2019: The Currency of Now…Register today here!

What is CBA?: CBA launched a new explainer video earlier this week discussing CBA’s membership footprint, the work banks do across the country to finance the American Dream, and the role CBA plays in promoting sound banking policy and educating the next generation of bankers. Condensing all the work our members do into less than two minutes really highlights how vital the banking sector is to our nation’s economy. Check it out!

Dems Ambitious Dodd-Frank Agenda if House Flips: After eight years in House minority and increasing chances of taking the majority after the elections, Democrats are ready to roll out their legislative priorities. A key area of focus will be to revisit many provisions in the Dodd-Frank Wall Street reform law – and I would not be surprised if oversight hearings for both regulators and the industry picked up dramatically. Last week, Rep. Maxine Waters (D-CA), proposed legislation to undo many of the Administration’s actions at the Bureau of Consumer Financial Protection. Like I said then, Members of Congress have taken issue with past Directors, the current Acting Director and I guarantee will complain about future Directors. If they do not like what the Director de jour decides and truly want to give consumers certainty, then they should support the bipartisan bill before the House Financial Services Committee to create a bipartisan commission so one person no longer unilaterally decides all the rules and call all the shots at the Bureau. More on the Democrats’ agenda here.

Banks Prepare for Downside of Higher Rates: With the rise of interest rates in recent years, banks have seen a huge surge in profits…but the effects are more nuanced and not all beneficial. While higher rates lead to higher loan interest, they can also knockout the bank mortgage business as customers take a second look at purchasing a home or refinancing. Full article here.

Robbers Turn to ATMs: The saying goes you should always follow the money and for robbers, that has historically led them to banks. Now, banks are not alone. Robbers have taken action on the devices known to hold cash in the five figures – ATMs. Last Friday, robbers in Anne Arundel County, MD attempted to “steal” an entire ATM…and in a separate incident, two men were sentenced to prison for beating and robbery of a man who was refilling ATMs throughout Washington, D.C. Full article here.

Banks at High Risk of Cyberthreat: With the digital transformation comes many customer benefits…convenience, accessibility, cost-effective platforms. Digitizing monetary assets is appealing for all of these reasons, but it is still dangerous. While banks spend a ton of money on information technology cybersecurity systems, more than three times the amount nonfinancial institutions spend, hackers are redoubling their efforts too. Full article here.

U.S. Treasury Department Backs Data Breach Alert Law & OCC’s Fintech Charter: Speaking of cybersecurity, senior Treasury Department officialCraig Philips declared his support for Congress to enact a law requiring notification when consumer data has been breached. Banks have some of the strictest data protection standards on the books and we believe more companies within the financial pipeline should work to offer the same protection to their customers as banks provider ours. Treasury officials also strongly endorse the OCC’s “fintech charter.” I have always said we welcome the competition fintechs bring, but the playing field has to be level. More here.

A man after my own heart, Josh is an avid golfer…but has not-so-favorable taste in sports. My Dallas Cowboys play his Jacksonville Jaguars on Sunday… may the best team win!

CBA State of the Week: Our third State of The Week is NORTH CAROLINA…where I was earlier this week with Members! CBA Members in North Carolina hold $484 Billion in total assets, employ 64,000 people, provide $10.6 Billion in small business loans and serve 4.6 Million customers –about 45 percent of all North Carolinians! Stay tuned for next week’s featured state and check out CBA state by state numbers here!