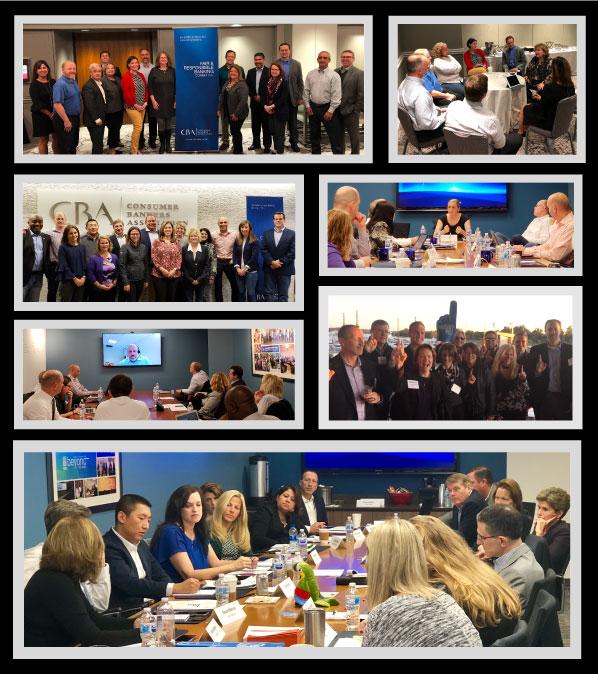 My top takeaway this week… On Wednesday, Comptroller of the Currency Joseph Otting spent a lot of time discussing CRA modernization efforts during his talk to the Exchequer Club here in D.C. He made three key points: he is committed to CRA modernization, calling it the"Number one reason" he came to Washington; branches are not obsolete, but the current assessment area framework can restrict CRA activity; and, he is confident the Fed and FDIC will be on board for the upcoming notice of proposed rulemaking.

In addition to CRA remarks, Comptroller Otting also spoke about de novo, risk, fintechs and capital structure. He noted that he expects an increase in de novo bank applications moving forward as they become a more viable investment; the OCC is watching leverage lending, construction lending, and high loan-to-value mortgage lending for potential issues; and, fintechs are increasingly less likely to pursue a bank charter in favor of finding new and innovative ways to partner with banks. He also said the OCC will likely put out a NPR on capital structures in the relative future.

Fair & Responsible Banking: CBA’s Fair & Responsible Banking Committee’s business meeting commenced Monday morning with a welcome from Chair Christina Speh of TD Bankand Vice Chair Mark Schultz of Capital One before sharing best practices and internal principles regarding banks’ approach to serving and communicating with Limited English Proficiency (LEP) customers or potential customers. For the most part, banks are choosing not to market to customers in a language other than English, unless they can service and communicate with that customer in their preferred language throughout the full product lifecycle.

Digital Channels: CBA’s Digital Committee led by Chair Josh Winstead of TIAA Bank and Vice Chair Kristy Brandon of Comerica met with the following regulators on Wednesday: Innovation Office Director Paul Watkins of the Bureau, Innovation Officer Matt Fifield of theOCC and Senior Fintech Risk Analyst Jeff Ernst of the Federal Reserve. On Thursday, we began with a presentation from Committee sponsor Fiserv on all things digital transformation and banking. Convenience is king and consumers are expecting faster, more seamless transactions. The banks that get digital – in all forms, not just mobile apps – right are going to thrive because high-touch digital customers stick with their banks, according to Fiserv’s research.

And, you guessed it…All committees discussed forum plans for CBA LIVE 2019: The Currency of Now! Register here for the must-attend event and check out what your fellow bank leaders have in store.

CBA Executive Banking School Faculty Meeting: Last weekend, we had CBA EBS faculty in town to continue analyzing and refining our unique curriculum for the upcoming July 21-31, 2019 CBA Executive Banking School session. Faculty attendees included EBS Chair Paul Leventhal, Ted Brauch and Cynthia Frederick of Citi, Tom Dent and Rebecca Rothenhoeferof PNC, Jill Enabnit and Bill Fanter of U.S. Bank, Consultants Jim Fugitte, Cathy Myers, Pat Riley and Dale Roskom, Allison Gambucci of Bank of the West, Melissa Kelly of Sandy Spring Bank, Joe McQuade of Santander, Tony Ross of Woodforest, Tom Smythe ofFurman University, Maureen Sullivan of Bank of America, Victoria Verhey of The Complete Approach, Seth Waller of TIAA Bank and Tony Warden of Texas Dow. Serving as mentors to students throughout the program and beyond, each of our faculty members brings “in the trenches” experience and context for what it takes to be a successful retail banker. MAYBE I am biased, but they are truly the best faculty…We are fortunate to have such a dedicated team of professionals committed to developing bank leadership! Learn more about EBS here.

Fed’s Brainard Seeks Input on CRA Reform: Federal Reserve Governor Lael Brainard, chair of the Fed’s Consumer and Community Affairs committee, encouraged banks and the public to submit comments to the OCC’s ANPR on CRA. While the OCC issued the ANPRwithout the FDIC or Fed, Gov. Brainard said the Fed would review submitted comments “in anticipation of working with the Comptroller and Federal Deposit Insurance Corp. on a joint proposal.” More here.

Bureau to Clarify Controversial ‘Abusive’ Standard: The Bureau’s provisions to restrict “abusive” acts under their Unfair, Deceptive or Abusive Acts or Practices (UDAAP) authority could have the most impact on the operations of CBA Member banks, both with regard to possible enforcement actions and rulemaking that would interpret them. Earlier this week, Acting Bureau Director Mick Mulvaney said the Bureau is working on regulation to define what constitutes abusive practices, noting actions constituting “unfair” and “deceptive” are well established, but does not believe “abusive” is nearly as well established in the law. Acting Director Mulvaney also reiterated “regulation by enforcement is done.” Learn more here.

CBA’s Community Reinvestment Committee: CBA’s CRC was in D.C. last Thursday and Friday to discuss CBA’s response to the ANPR as well as whether a metric approach could be developed, what activities should qualify for CRA credit and what assessment areas banks should be responsible for. The committee also met for two hours with OCC senior officials led by the Senior Deputy Comptroller, Grovetta Gardineer. Banks have a continuing responsibility to meet the credit needs of their communities, but in recent years banking has seen major changes. Recognizing those changes and bringing CRA into the 21st Century will ensure community investment dollars are put to work where they are most needed. The CRC is led bySue Whitson of BMO Harris…Listen to a podcast she taped recently on CRA reform.

HMDA Update: On Wednesday, the Bureau of Consumer Financial Protection released its unified regulatory agenda. Prior to the enactment of the EGRRCPA, the Bureau had already put a rulemaking on its Spring 2018 Agenda to reconsider aspects of its 2015 rulemaking to implement Dodd-Frank Act amendments to HMDA, including but not limited to the threshold for collecting and reporting HMDA data with respect to open-end lines of credit. In addition, theBureau anticipates engaging in notice-and-comment rulemaking to incorporate the EGRRCPAinterpretative and procedural rule mentioned above into Regulation C and to further implementERGGCPA. The Bureau expects to issue a Notice of Proposed Rulemaking in Spring 2019 to address some or all of the issues related to these HMDA projects.

Latest on TCPA: Following a Ninth Circuit Court Decision which caused the FCC to file a public notice reassessing the definition of an Automatic Telephone Dialing System (ATDS), CBA submitted comments stating an ATDS should only include systems which dial "random" or "sequential" numbers without human intervention. Full letter available here.

Right-Sizing Federal Student Lending: Consumer Banking Vice Chairman Brad Conner ofCitizens Financial Group and CBA’s immediate past chair, penned an op-ed for The Hill with SVP Bill Hoagland of the Bipartisan Policy Center discussing ways to improve the student lending marketplace. One of CBA’s top priorities has been right-sizing the federal student lending footprint so students have greater access to the private marketplace while ensuring the federal government continues its important role of serving those most in need.

I’ve said it before and I’ll say it again, private lenders offer a responsible product to help students achieve their education goals with transparent, plain language “Know Before You Owe”information. The same cannot be said for the current state of federal student lending, which can burden students with unmanageable debt.

Santander & CapitalOne On the Move: This week, Santander Bank announced its expansion of commercial banking unit into the Southeast region based in Miami, Fla., serving clients and prospects in neighboring states…Capital One’s grand opening of Capital One Café in D.C.’s Chinatown neighborhood is today and tomorrow, offering a space for people to connect with financial planners offering free advice – and is open to not only CapitalOne customers, but also to the public. A great idea!

Walmart & PayPal Roll Out Digital Product: Walmart and PayPal partnered to offer a new financial service for shared customers. Here’s how it works: PayPal cash in and cash out money services will be available at Walmart locations for a fee of $3 per service, and PayPalMasterCard customers will also be able to access their cash balance at Walmart service desks, ATMs and cash registers for that same $3 fee. Walmart customers are now able to load cash into their PayPal accounts at Walmart. This is the first time PayPal mobile app users have the option to take cash from their account at a physical location. The fintech partnerships are reaching beyond the bank…

Financial Data Exchange Launch: On Thursday morning, financial institutions, fintech firms and industry groups announced the launch of the Financial Data Exchange (FDX), a nonprofit committed to unifying the financial industry to secure exchange of consumer and business financial data. In light of the digital transformation, consumer protection is a top priority and FDXwill be valuable to our banks' criteria for secure data sharing, granting more control to consumers. Learn more about FDX, membership opportunities and services here.

Joining Huntington’s auto lending unit almost 30 years ago, Rich is an auto finance veteran and has held a variety of leadership positions prior to becoming President in 2017. As President of Auto Finance & Dealer Services, Rich oversees business strategy, day-to-day operations, as well as 180 professionals serving nearly 4,500 dealerships across 23 states in the Midwest and New England.

With a home base in Ohio, Rich spends much of his free time on his boat with wife Lori and kids Rachel and Richie. He is enjoying the final days of watching high school senior Richie play soccer as he and Lori prepare for empty-nester life!

Rich also recently recorded an episode for CBA’s Suite 550 podcast with myself andLou Loquasto, the Auto Vertical Leader at Equifax discussing the latest auto lending trends, the continued strength of the auto lending market, what cars Americans are buying among other hot topics in the sector.

Richard Davis Heads to Make-A-Wish America: This week, Make-A-Wish America’s Board of Directors appointed former CBA Chairman Richard K. Davis to be CEO, effective January 2, 2019. Richard is a U.S. Bank veteran, having most recently served as Executive Chairman and previously as President and CEO. He was also a form He is very committed to the work and vision of Make-A-Wish…Best of luck in this next chapter and congratulations!

Happy Birthday to Danni Lu: We celebrated Vice President of Finance Danni Lu’s birthday last Friday with some delicious cupcakes! Thanks for all of your hard work, Danni…and for the excuse to eat cupcakes for lunch!

CBA State of the Week: Our fourth State of The Week is COLORADO, where more than 1 out of every 3 residents banks with a CBA Member institution! CBA Members in Colorado hold $116 Billion in total assets, employ 24,000 people, provide $2.6 Billion in small business loans and serve 2 Million customers! Stay tuned for next week’s featured state and check out CBA state by state numbers here!