CFPB Director Richard Cordray and Acting OCC Comptroller Keith Noreika continue to publicly air their disagreements over the merits of the CFPB’s arbitration rule. Recently, both agency heads published dueling op-eds in The Hill challenging each other’s views of the rule. This week, the debate continued to escalate as both challenged the validity of the opposing agency’s analysis on how the rule would affect the cost of credit. This is about more than who is right and who is wrong. It is about what is best for consumers. Arbitration has long provided a faster, more cost-effective and higher recovery alternative to class action lawsuits. Congress should work to overturn the CFPB’s rule.

Late last week, the OCC issued a bulletin updating its examination policy to clarify the reasons a bank may receive a CRA-related downgrade. According to the bulletin, a downgrade "should be supported by strong evidence of quantitatively and qualitatively material instances of discriminatory or illegal credit practices directly related to CRA lending activities that have resulted in material harm to customers." Click here to get a deeper read on the issue.

As the Senate debates financial reform, National Economic Council Director Gary Cohn expects the $50 billion SIFI threshold to be quadrupled. While revising or updating regulations with negative consequences is heartening, we encourage policymakers to take a more holistic approach to SIFI reform: analyzing the inner workings of an institution’s business model is a much better approach to assessing risk than simply glancing at an institution’s balance sheet and total assets.

With a “big announcement” scheduled today October 20, reports suggest Ohio Supreme Court Justice Bill O'Neill will throw his hat in the ring for the Democratic nomination in Ohio’s Governor Race. The sitting justice mentioned he would not run for Governor if CFPB Director Richard Cordray enters the race. Should Justice O'Neill enter the race, the million dollar question is: Will Richard Cordray stay at the CFPB or relinquish the post and run for Governor? At the moment, there is no word from Director Cordray, but the February 7, 2017, deadline to enter the race is looming.

Digital Disrupters Are Here to Stay

From your television screen to the palm of your hand, traditional media giant NBCUniversal has teamed up with social media disrupter Snapchat to produce and distribute original content via the Snapchat app. Additionally, MoviePass has partnered with movie theatres across the country to counteract the disruption Netflix has brought to the industry by offering a monthly subscription service for in theatre movies. Both of these developments show just how much digital transformations are forcing industries across all sectors of the economy to adapt. This is why our member banks are working tirelessly to keep up with consumers’ digital wants and needs to ensure a topnotch customer experience is provided.

With Q3 earnings rolling in, here are a few of CBA’s top takeaways from this quarter’s returns:

This week, the CFPB released a set of data sharing principles it is encouraging companies to follow when handling consumers’ financial data. In the report, the CFPB recommends data should be collected only with consumers’ direct consent and be discarded after its intended use is complete. The guidance also stated third parties must notify consumers when they gain access to their data and protocols should be put in place for consumers to address inaccurate information. For a complete list of the CFPB’s recommendations, please read their report here.

Membership Spotlight: CBA Visits With Membership In Tennessee and Arkansas

I had great meetings with CBA Members at First Tennessee Bank, Independent Bank and Bank of the Ozarks this week.  We discussed M&A trends, banks’ efforts to protect consumers from cyber criminals, and the future of the CFPB to name a few topics. Glad to see First Tennessee CEO Bryan Jordan and EVP Chris Van Steenberg as well as many CBA Committee Members from these banks.

Over the past week, CBA hosted several of our committees in Washington, D.C., including our CFPB, Fair and Responsible Banking, and Risk Committees as well as our Consumer Complaints Subcommittee. Additionally, our Digital Channels Committee met in New York for its fall in-person meeting. Here are a few of CBA’s top takeaways from this round of meetings:

Thank you to those who met with our committees, including Scott Fisher of Treliant Risk Advisors, Sarah Welch, Andrew Hovet and Hank Israel of Novantas, Jessica Turner and Keith Douglas of MasterCard, Philip Aquilino and Brian West of Boston Consulting Group, Kitty Ryan of Buckley Sandler LLP, Ilmeda Newton of Fraud and Identity Solutions, Luke Brown of the FDIC, Nida Davis and Carol Evans of the Federal Reserve, Deb Peery and Paul Reymann of the OCC and Tim Lamber, Patrice Ficklin, Christopher Johnson, Scott Steckel and Derek Standarowski of the CFPB.

The Fair & Responsible Banking Committee heard a briefing from CBA President & CEO Richard Hunt during its in-person meeting this week in Washington, D.C. 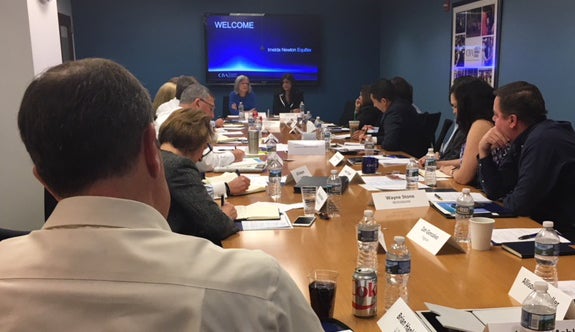 This week, the OCC's Deb Peery (center, left) and the Fed's Nida Davis (center, right) spoke with CBA's Risk Committee during its meeting in Washington, D.C.

Stephen Squeri was named CEO of American Express. Previously, Stephen served as vice chairman and group president of Amex’s global corporate services group. He will succeed Ken Chenault who will retire after 17 years as CEO.