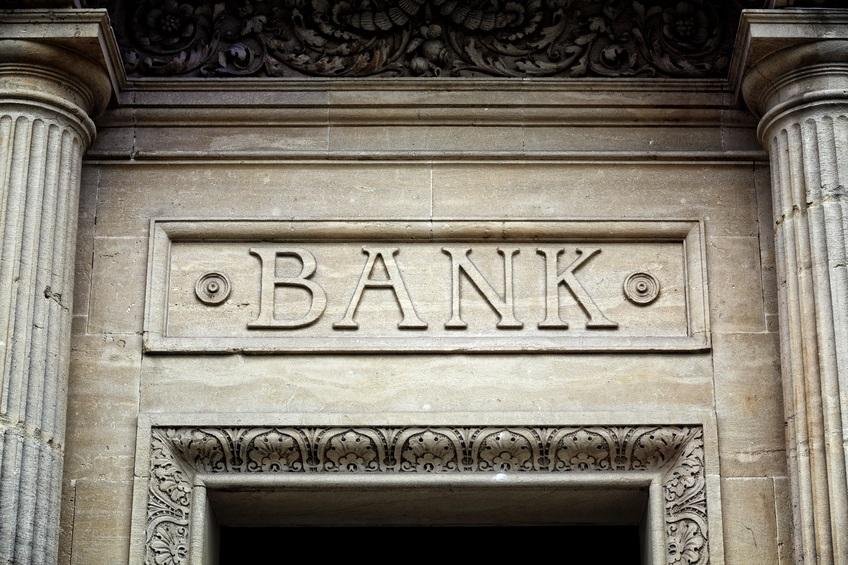 Time to Revamp the CFPB Structure

Last week, a federal court decided a sitting president could immediately remove a CFPB director on a whim. This decision is concerning as it subjects the Bureau to political pressures by placing its directorship under the thumbprint of the president. In response, I penned an op-ed in USA Today calling for a five-person, bipartisan commission at the CFPB. With jurisdiction over 15,000 institutions and whose decisions impact millions of consumers every day, now is the time for Congress to act to ensure the CFPB remains a strong, stable and effective regulator for generations to come.

You may read my op-ed here.

Can you believe we’re only 18 days away from Election Day? Be sure to mark your calendar: CBA will hold a members-only webinar on November 9, 2016 at 3:30 P.M. EST to talk about what the election results mean for retail banking. Stay tuned for more details!

CBA Presses FCC to Think of Consumers Ahead of TCPA Decision

Oral arguments began this week in CBA’s Telephone Consumer Protection Act (TCPA) case against the FCC this week. By imposing unworkable standards in its 2015 TCPA Omnibus Order, the FCC effectively severed the lines of communication between a consumer and their bank. At a time when the world has become increasingly mobile thanks to innovative technologies, it is astounding the FCC did not take into account how its Order will prevent the flow of critical and time-sensitive financial information.

Communication channels in the 21st century, which consumers use every day, should not be directed by a law enacted more than two decades ago and well before iPhones or text messages existed. CBA looks forward to the Court’s decision, and, in the meantime, will continue to advocate on behalf of consumers and their bank.

CBA has produced two fact sheets on TCPA which you may view below:

This week, the FDIC released its annual National Survey of Unbanked and Underbanked Households for 2015. The survey found Americans without access to a bank account fell to 7% in 2015, down from 7.7% in 2013. CBA has long believed consumers should have the opportunity to access banking services, and the increasing number of Americans taking advantage of the financial benefits banks offer is great news.  Many of CBA’s member banks continue to offer alternative accounts which enable countless consumers to bank within the well-regulated banking system.

You may view a deeper analysis of the FDIC’s survey here.

My Keynote Address at K&L Gates

This week, I delivered a keynote speech at K&L Gates’ Consumer Financial Services Symposium in Washington, D.C. on the state of retail banking. Thank you Dan Crowley of K&L Gates for inviting me, and I look forward to seeing everyone again soon!

Always Great to See our Membership!

Great to see so many CBA members in Washington, D.C. this week! We always enjoy hosting our committees, and it was a pleasure having our Community Reinvestment Committee, Fair and Responsible Banking Committee and Internal Audit Working Group in town to discuss our goals for the upcoming year. We’ll have the welcome crew ready to go next week when our Small Business Committee comes to town.

Thank you to Theresa Stark of the Federal Reserve, Patience Singleton of the FDIC, Bobbie Kennedy of the OCC, and Tim Burniston and Barbara Boccia of Wolters Kluwer for meeting with our Community Reinvestment Committee. Thank you to Jon Seward of the DOJ and Sarah Davies and Nick Rose of VantageScore Solutions for speaking with our Fair and Responsible Banking Committee. Thank you to Maria B. Earley of Reed Smith, and Lyn Farrell and Scott Fisher of Treliant Risk Advisors for speaking to our Internal Audit Working Group. 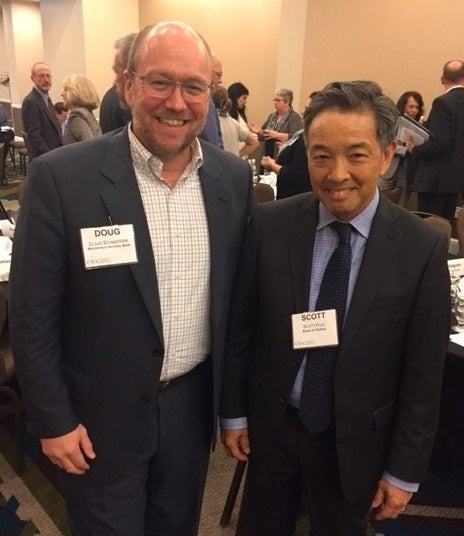 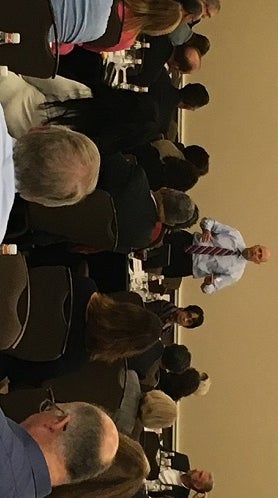 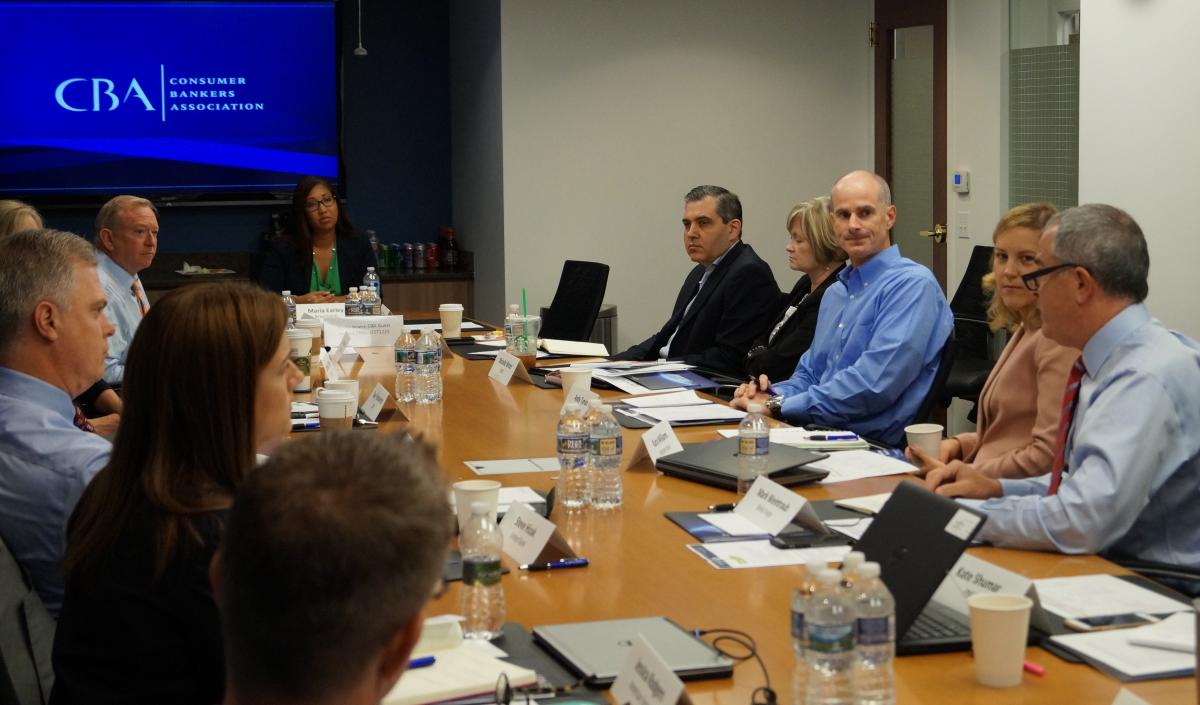 Maria Earley of Reed Smith, LLP stopped by CBA HQ this week to speak with our Internal Audit Working Group.

Alfred Kelly was named CEO of Visa. Alfred previously served as a member of Visa’s board and as president of American Express

John Davidson has retired as chief compliance officer at Citi. 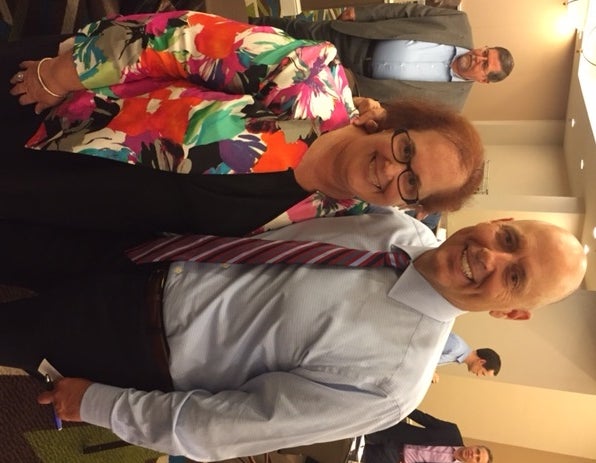 Best Wishes to Jan Woosley, who will retire from MUFG Union Bank early next year. Jan is an invaluable member of the CBA family and is a past Community Reinvestment Committee chair.

CBA OnSite traveled to Chicago this week to teach MarketSim to an eager class of Harland Clarke students.