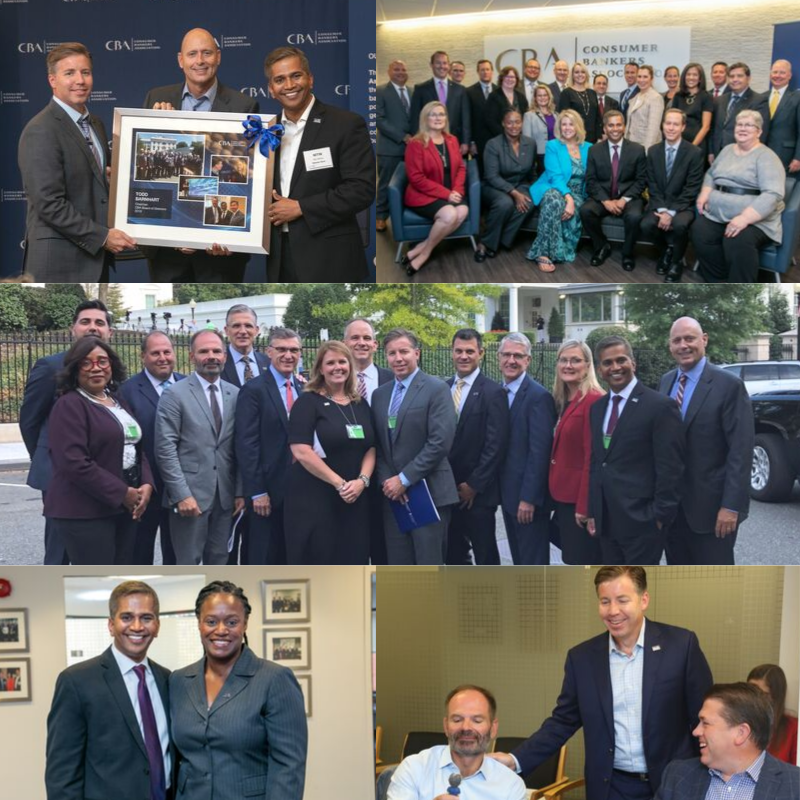 CBA General Programs
September 13, 2019
CBA Leadership Summit 2019 was a success! We had a wonderful, action-packed two days with Committee Chairs, Vice Chairs and our Board of Directors. While everyone was in town, we met with FDIC Chairman Jelena McWilliams, CFPB Leadership and the White House economic team.
Most importantly, CBA celebrated our 28-year CBA veteran and General Counsel Steve Zeisel’s retirement with the Zeisel family.

Cajun Thoughts: CBA LEADERSHIP SUMMIT 2019 The CBA Leadership showed their love and support for our Steve Zeisel at the CBA Leadership Summit annual dinner. In a major announcement, we have renamed the Committee Award distributed to the group with the most substantive dialogue, meetings with regulators and participation to be the Steve Zeisel Committee Award. CBA LIVE 2020 will showcase the first winner! ... ARTICLES THIS WEEK Three articles caught my eye this week: Chase lowering forecast estimates and Charles Schwab laying off about 600 employees - both due to lowering interest rates and inverted yield curves. Also, M&T Bank said they are not opposed to a merger of equals ... KIRAN ANALYTICS SUMMIT Great to see CBA Diamond Sponsor Kiran Analytics President Jim DeLapa and VP, Sales & Marketing Kerim Tumay at their annual summit in San Diego - the site of CBA LIVE 2020 taking place March 23-25, 2020. I was joined on stage by Chief Retail Banking Officer Jennifer Upshaw of Synovus, a member of CBA's Mid-Tier Retail Executive Forum. She was recently promoted to Chief Retail Banking Officer, effective May 6, 2019, moving from her role as Group Executive, Marketing ... E. WARREN WAR WITH OBAMA TEAM Good story in POLITICO - This reporter finally got it right! Democrats were the ones who prevented Elizabeth Warren from being the head of the CFPB, NOT Republicans or banks. I always said she at least deserved a vote.

Nitin Mhatre Takes CBA Board Gavel, Other Leadership Summit Updates: I loved having our Board of Directors and Committee Chairs and Vice Chairs in town for leadership transitions, business discussions and meetings with the White House, FDIC and CFPB.

CBA elected Nitin Mhatre, Executive Vice President, Head of Community Banking at Webster Bank, as its Chairman of the Board of Directors and Dennis Devine, President of Consumer Banking at KeyCorp, has been named Chair-Elect. We are also glad to see Brad Conner, Vice Chairman, Consumer Banking at Citizens re-elected to CBA Board of Director’s after wrapping up his three-years of service on the Admin Committee.
Incoming Chairman Nitin Mhatre of Webster Bank accepted the gavel from Immediate Past Chair Todd Barnhart of PNC Bank. Todd did an outstanding job as Chair and will remain on the Board as Immediate Past Chair. Dennis Devine of KeyBank was elected as Chair-Elect. What an action-packed two days and exciting time at CBA HQ.
Check out our announcement about the upcoming year and listen to Nitin in the hot seat on our Suite 550 Podcast.
During the Leadership Summit, we said thank you to the following outgoing committee chairs:
Finally, the Board approved new legislative and regulatory priorities for Fiscal Year 2020:
CBA Priorities:
CBA's full list of Board Members for the upcoming year is available here.
Reception & Dinner
Below are some photos taken at the Leadership Summit reception and dinner Tuesday night.

FDIC 19th Annual Bank Research Conference: Below are key takeaways from Chairman Jelena McWilliams' remarks at the FDIC's 19th Annual Bank Research Conference:
CFPB Updates No-Action Letter Policy, Trail Disclosure Policy & Compliance Assistance Sandbox: On Tuesday, the CFPB announced major initiatives aimed at reducing regulatory uncertainty as financial institutions aim to develop innovative products and services.
CFPB Issues Policies to Facilitate Compliance & Promote Innovation
Speaking at a town hall in Atlanta, GA, CFPB Director Kathy Kraninger unveiled three new policies aimed to promote innovation while facilitating compliance: the No-Action Letter (NAL) Policy, Trial Disclosure Program (TDP) Policy and Compliance Assistance Sandbox (CAS) Policy. These new policies follow proposals released last year that CBA commented on in full.
New NAL Policy Sections:
Many of the changes to the NAL were advocated for by CBA in comments submitted at the beginning of this year to the Bureau. In addition to the new NAL policy, the Bureau issued its first NAL under the new policy in response to a request by the Department of Housing and Urban Development (HUD) on behalf of more than 1,600 housing counseling agencies.
The NAL is aimed at allowing for HUD and counseling agencies to enter into agreements that fund counseling services that previously raised Real Estate Settlement Procedures Act concerns. It states the Bureau will not take supervisory or enforcement actions against certain HUD-certified counseling agencies that have entered into certain fee-for-service arrangements with lenders for pre-purchase housing counseling agreements. The NAL also functions as an example of how an organization may be able to apply for a NAL on behalf of its membership or other interested stakeholders.
In coordination with the release of the NAL, the Bureau also established the Compliance Assistance Sandbox (CAS) to enable testing of a financial product or service where there is regulatory uncertainty. The CAS establishes that after the Bureau evaluates a product or service for compliance with relevant law, an approved applicant that complies in good faith with the approval will have a “safe harbor” from liability for the specified conduct. Approvals under the new CAS policy will provide protection under the Truth in Lending Act, Electronic Fund Transfer Act, and Equal Credit Opportunity Act.
The Bureau also released a new Trial Disclosure Program (TDP) that is aimed at entities seeking to improve consumer disclosure by allowing them to conduct in-market testing of alternative disclosures for a limited time. The updated TDP also streamlines the application and review process to allow for more entities to take advantage of the program.
CBA commented on the TDP program as well in 2018 and have seen many of the changes we advocated for adopted.
The American Consumer Financial Innovation Network (ACFIN)
Finally, the CFPB in coordination with multiple state regulators launched the American Consumer Financial Innovation Network (ACFIN) to enhance coordination among federal and state regulators looking to facilitate innovation. While all state regulators are invited to join ACFIN, the initial members are the Attorney General Alabama, Arizona, Georgia, Indiana, South Carolina, Tennessee, and Utah.
ACFIN is built to enhance shared objectives such as competition, consumer access and financial inclusion, and should promote regulatory certainty for innovators.
CBA Writes HFSC on Student Lending: In advance of the House Financial Services Committee hearing examining student debt and non-bank student loan servicers, CBA wrote Committee leadership to discuss needed student lending reforms.
As lawmakers look for solutions to help borrowers get out from under the growing and worrisome student debt crisis, it is important to have a clear understanding of the crux of the problem. Student loan debt in America currently stands at $1.58 trillion. The federal government dominates the market, holding an astonishing 92 percent or $1.44 trillion of this debt. With one in five federal borrowers seriously delinquent or in default and many experiencing increasing loan balances post-graduation, it is clear federal student loans are driving this crisis.
Private student loans, by comparison, have a successful repayment rate of approximately 98 percent and CBA members discharge student loans in the case of borrower death or disability.
A copy of CBA’s letter to the committee is available here.
CBA also wrote the committee discussing various student loan related bills which is available here.
In the letter, CBA called on Congress to address the cost of college, which according to the Federal Reserve Bank of New York is driven in part by federal over-lending. Improving up-front disclosures and bringing them in line with those currently offered by private lenders which detail the terms and conditions of federal loans should be a first step.
Earlier this year, CBA requested the Department of Education and Consumer Financial Protection Bureau to work together to improve federal loan disclosures. A copy of that letter is available here.
CBA also discussed the need for the committee to oppose state-level student lending laws that reduce the ability of federal agencies to oversee financial institutions and create an intersecting web of conflicting state provisions.
CBA members include private sector lender who make the majority of non-federal, private student loans.
Learn more about CBA’s work to improve the student loan marketplace here.
Federal Reserve Gov. Michelle Bowman to Serve Full Term: By a vote of 60-31, the Senate on Thursday agreed to extend Fed Gov. Michelle Bowman's partial term to a full 14-year term. Now serving past the partial term expiration at the end of January, Bowman is the first Fed governor to fill the Community Bank seat.

OCC Approves Fifth Third Bank’s National Charter Application: The OCC on Wednesday approved Fifth Third Bank’s application to convert from a state bank to a national bank and operate with the OCC as its primary regulator rather than the Fed. This charter allows the bank to expand beyond its current 10-state territory and bank officials said it will "better align regulatory supervision with its expanding national business model by streamlining its operations under one uniform set of laws and regulations." The decision letter is available here.
Regions’ Tangie Holland Named to Momentum Leadership Program: CBA CFPB Committee Chair Tangie Holland of Regions Bank was selected as a member of Momentum’s Leadership Program Class of 2019-2020. Momentum is Alabama’s highly competitive, premier women’s leadership program featuring a diverse group of senior-level leaders from a variety of organizations. Congratulations, Tangie!
TD Bank to Launch Financial Job Market Program: TD Bank recently announced it will begin a program in 2020 that will help financial professionals reenter the job market after taking a break of two years or more. The 16-week program will begin in New York City.
U.S. Bank Acquires POS System: U.S. Bank’s digital expansion continues with the purchase of talech POS, a small and medium-sized business point-of-sale (POS) software company. This is the first acquisition with new Chief Digital Officer Derek White, who noted it makes sense for the bank as it continues to streamline operations for businesses.
JPMorgan Chase Lowers 2019 Net Interest Income Outlook: JPMorgan Chase CEO Jamie Dimon on Tuesday announced a lower forecast for the bank’s 2019 net interest income than he originally gave in mid-July. Dimon had stated $57.5 billion and now predicts a number closer to $57 billio, about a $500 million drop. Other CBA member banks Wells Fargo and Citi also tempered their projections for net interest income, suggesting lower interest rates and inverted yield curves affect banks’ ability to make as much money.