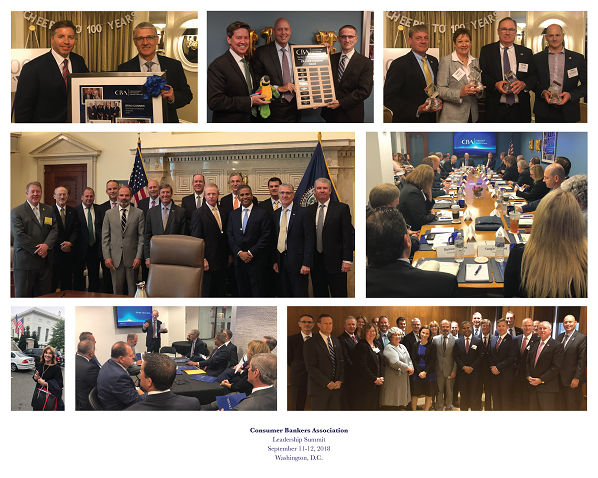 Hurricane Florence: As a southerner and hurricane veteran myself, I know how threatening tropical storms can be. CBA’s thoughts and prayers are with all member banks and communities impacted by Hurricane Florence’s dangerous conditions. I know your banks are preparing to help customers as well as team members in Florence’s path. Please let us know if we can help.

Todd Barnhart Takes CBA Board Gavel & Other Leadership Summit Updates: One of my favorite times of the year has come and gone – CBA’s annual Leadership Summit. I love having our Board of Directors, Committee Chairs and Vice Chairs in town!

Incoming Chairman Todd Barnhart of PNC Bank accepted the gavel from Immediate Past Chair Brad Conner of Citizens. Brad did an outstanding job promoting CBA and we are all excited to build on the strong foundation already in place.

The Board also selected Nitin Mhatre of Webster Bank & Webster Financial Corporation as Chair-Elect and Tim Spence of Fifth-Third Bank as a new Board Member. What a fun-filled two days and exciting time at CBA HQ! Check out our announcement about the upcoming year and listen to Todd in the hot seat on our Suite 550 podcast. Todd also talked with American Bankerabout our upcoming agenda – read that great article here.

During the Leadership Summit we said thank you – but not goodbye – to the following outgoing committee chairs:

In addition to announcing a new leadership team, we met with Federal Reserve Chairman Jerome Powell, FDIC Chairman Jelena McWilliams, Counselor to the Secretary U.S. Department of the Treasury Craig Phillips, Special Assistant to the President for Financial Policy Andrew Olmem and representatives with FinCEN.

Here are key takeaways from those meetings:

Finally, the Board approved a new mission statement for CBA as well as our legislative and regulatory priorities for the upcoming year.
Mission Statement:

CBA LIVE 2019 – Open for Business: I would be down about CBA’s Leadership Summit coming to a close, but luckily we have kicked off another one of my favorites – CBA LIVE! That is right, registration is open and the theme has been announced. In fact, TD Bank’s Christina Speh was our first registration this year. Join myself, the CBA Team and Christina for CBA LIVE 2019: The Currency of Now. Learn more and register today here.

House Dem Says One Way to Save BCFP: During the House Financial Services Committee markup, Rep. David Scott (D-Ga.) again called for Congress to pass legislation creating a bipartisan commission at the Bureau of Consumer Financial Protection. Rep. Scott is a senior member of the House and – along with Reps. Dennis Ross (R-Fla.), Kyrsten Sinema (D-Ariz), Ann Wagner (R-Mo.), Vincente Gonzalez (D-Texas), Blaine Luetkemeyer (R-Mo.) and Patrick McHenry (R-N.C.) – a sponsor of the bipartisan Financial Product Safety Commission Act of 2018 (HR 5266). This bill would create a bipartisan commission at the Bureau and Rep. Scott said it “breaks my heart” the Committee did not consider the bill during this markup. As you know, creating a commission at the Bureau has been a top priority for CBA because, as Rep. Scott put it, “Until we get the CFPB out of the unpredictable winds of political change, we will consistently have to go through” regulatory uncertainty.

Interagency Statement on Guidance: During our meeting with FDIC Chairman Jelena McWilliams, she said supervisory guidance does not have force of law and agencies do not take enforcement actions based on supervisory guidance. Her announcement coincided with a joint statement from the FDIC, Federal Reserve, Bureau of Consumer Financial Protection, NCUA and OCC. The statement helps clarify a ruling by the Government Accountability Office last year that found previous regulatory guidance had been treated as official rulemaking, therefore making it subject to Congressional review.

FSOC Updates: According to reports, Craig Phillips, counselor to U.S. Treasury Secretary Steven Mnuchin, told attendees at the Exchequer Club earlier this week Financial Stability Oversight Council members are looking to release an “activities-based approach to designations” possibly later this year. CBA supported the flexibility given to regulators in S. 2155 and advocated for regulators to have additional flexibility to evaluate financial institutions based on activities as opposed to an arbitrary asset threshold. It is our hope that Congress will establish a bipartisan commission at the Bureau and enact reforms which take a more holistic view of systemic risk based upon individual institutions’ activities.

In other FSOC news, the Council voted to remove its designation of Zions Bank as a systemically important financial institution, making it the first bank to formally lose the label at the council’s discretion. The council concluded that Zions does not pose a significant threat to the nation’s financial stability to be seen as a risk. More here.

Financial Crisis 10th Anniversary: The bankruptcy of Lehman Brothers Holding Inc. in September 2008 resulted in a downward spiral for the U.S. economy which ultimately rippled across global financial markets. While it seems like yesterday to many, the banking industry is a lifetime away from those days. We are better capitalized and constantly working to strengthen our foundations for when another economic downturn hits.

This anniversary prompted me to re-watch one of my favorite movies – “Too Big to Fail” – which chronicles the crisis of 2008 and focuses on the strategy of then U.S. Secretary of Treasury, Henry Paulson. A must watch!

Goldman Names Waldron Next President & COO: Goldman Sachs announced yesterday John Waldron would be its next president and COO once David Solomon takes the reins as Goldman’s CEO.

Increase in Household Income: The Census Bureau reported that median U.S. household income reached $61,400 in 2017 – a 1.8% increase from 2016. The Census took inflation into account, so the evident growth is that much more meaningful.

Bureau Announces New CAB: The Bureau’s Acting Director Mick Mulvaney recently announced the reconstruction of the new Consumer Advisory Board, which as previously indicated include fewer members. This new board includes nine members, down from 25 as well as reduction in terms from three years to one year. I was surprised there is not a banker on the board. The list of CAB members is available here.

Congratulations to Union Bank’s Newest Hire: Maria P. Tedesco will join CBA Member Union Bank & Trust at the end of the month as President out of Richmond, VA. Maria has been on the team of two other CBA Members, BMO Harris Bank and Santander. She is also a former CBA Board Member and served on our Small Business Committee. So, congratulations Maria and we are glad you are still in the CBA family!