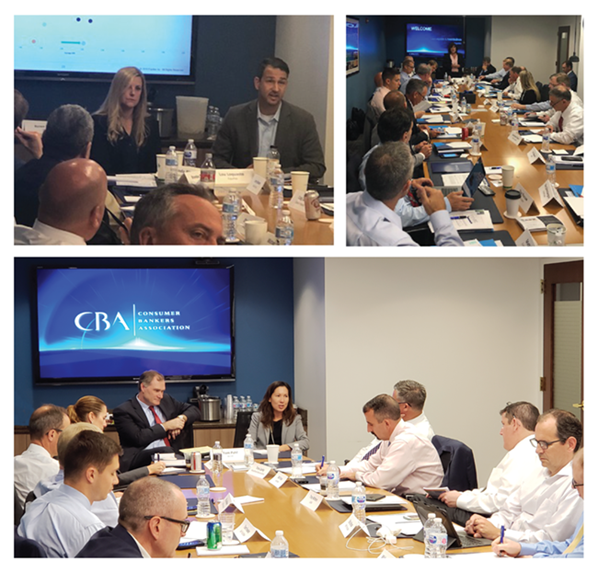 Hurricane Florence Efforts: Banks are stepping up once again to help those impacted by natural disasters. Bank of America, Wells Fargo, Fifth Third, JPMorgan Chase, Bank OZK and Regions are among the many CBA members lending a hand and offering monetary support.

CBA Default Management Committee (DMC) & Auto Finance Committee In-Person Meetings: This week, CBA HQ hosted the first two of our fall in-person committee meetings: Default Management and Auto Finance! Below are updates:
DMC: CBA’s Default Management Committee focuses on education, legislative and regulatory issues and benchmarking for consumer products default within banks. The Committee began their annual in-person meeting by thanking Tom Fowler of SunTrust Bank for his service as Chair of the Committee, and welcomed incoming Chair, Michael Grossberg of PNC.
The Committee was briefed on issues surrounding the credit lifecycle from Vice President Bob Longeran of Zoot Enterprises, best practices in performance management from President & CEO Jeremy Roberts of the Center for Business Solutions, and trends in collection processes from Matt Higginson of McKinsey & Co. After a morning of presentations, the Committee held a roundtable discussion on topics including residual liability for the sale of debt, trends in call intensity for collections and the use of AI throughout the collection process.
Finally, the Committee held a discussion with Policy Associate Director Tom Paul of the Bureau of Consumer Financial Protection and Senior Counsel, Kristin McPartland around updates at the Bureau under Acting Director Mulvaney and the future of debt collection rulemaking.
Auto Finance: CBA’s Auto Finance Committee focuses on furthering fair and responsible lending throughout the marketplace as it acts as an educational resource for dealers and lawmakers. After welcoming new committee leader Richard Porrello of Huntington Bank and thanking outgoing Committee Chair Peter Kidd of Fifth Third, we kicked off this in-person meeting with an Equifax presentation regarding credit scores, loan to value effecting losses and consumers locking credit files. Our business discussion focused on fraud, dealer management, Bureau auto lending guidance and gap refunds required by lenders versus dealers.

To conclude our meeting, Financial Institutions and Business Liaison Assistant Director Dan Smith and Senior Counsel Kristin McPartland of the Bureau updated us on the regulatory agency’s current focus.

Talent Management Committee: This committee was scheduled to meet in-person last week but called an audible due to Hurricane Florence and met via video conference call. The Boston Consulting Group (BCG) presented a demand/supply side view of what is impacting talent and discussed how BCG is using key words searches in LinkedIn to ascertain how digital activities are being incorporated in more job roles.

One of the committee members noted people tend to keep their LinkedIn profile more current than their job description and thus the thought of leveraging public data sources such as LinkedIn to understand their employee activities/skills prompted some interesting discussion. We had partnered with Bridgeforce in conducting a survey and those results generated active discussion as well. The Top 6 challenges were captured and there was agreement that our focus in FY19 will be on the Top 3.

One interesting factoid for me was the use of digital already occurring within Talent with 86% utilizing standardized assessments in the recruiting process and 21% leveraging data/predictive modeling as well. It was such a great meeting, we are going to start providing members a video option for all our regular monthly calls.

OCC’s Otting on Consumer Choice: On Tuesday, Office of the Comptroller of the Currency’s Joseph Otting wrote an op-ed asking why state regulators want to limit consumer choice by not accepting special purpose charter applications. While it remains unclear how many fintech companies will develop into national banks, the OCC decided to accept national bank charter applications from fintech companies involved in banking. Otting reiterates his responsibility as Comptroller to ensure the system continues to operate in a safe and responsible manner, treats customers fairly and serves the interest of the nation and its economy. Read the full article here.

Interagency Statement on Hurricane Florence: The Office of the Comptroller of the Currency, the Board of Governors of the Federal Reserve System, the Federal Deposit Insurance Corporation, the National Credit Union Administration and the state regulators issued an interagency statement stating their intention to offer appropriate regulatory assistance to financial institutions subject to their supervision affected by Hurricane Florence. The agencies encourage institutions operating in affected areas to meet the financial needs of their communities in the aftermath of this major disaster – and as we already noted, many banks are assisting.

CBA will continue to keep you informed as data security and fintech issues are debated in Congress. If you have any questions about the hearing, please contact Sam Whitfield or Kristen Fallon.

In Case You Missed It: Registration for CBA LIVE 2019: The Currency of Now is OPEN! Join us in Washington, D.C. to mark the tenth year of retail banking’s premier event and 100 years of CBA! Save $300 when you register by the deadline of January 18, 2019. Sign up online here!

Goldman Sachs Names New Banking Unit Chief: On Monday, Goldman Sachs named Carey Halios, an 18-year company veteran, as CEO of its lending and deposit-taking division. Halio has served as Chief Financial Officer of Goldman Sachs Bank USA for the past four years, and prior to that worked in the company’s credit risk division. Starting Monday, October 1st, Halio will oversee the bank’s capital planning and regulatory affairs with a specific focus on deposit growth. In an interview with American Banker, Halio said growing the company’s deposit base is a top priority. Read the full article here.

Discriminatory Lawsuit Against the Bureau: Two employees of the Bureau of Consumer Financial Protection filed a lawsuit charging the regulatory agency with discrimination under former head Richard Cordray. This lawsuit could impact his race for Ohio governor against Republican candidate Mike Dewine. Full article here.

U.S. Already Wins Banking’s “Ryder Cup”: In the aftermath of the 2008 financial crisis, U.S. banks were forced to make serious changes to stabilize the financial sector. While European banks were affected, they were riding higher than U.S. banks in net profit. Today, U.S. banks are almost twice as profitable as European competitors, and the gap appears to be widening. Wall Street’s top banking groups have established a powerful presence in global corporate and investment banking, while European banks have been weakened by the subsequent debt crisis. Read more here. The CBA team is just getting you ready for the REAL Ryder Cup.

Amazon Prime Members Interested in Online Bank: A recent Bain & Co study revealed that two-thirds of Amazon Prime members would sign up to try banking with the tech giant. In contrast, only 43% of regular Amazon customers and 37% of non-Amazon customers said they would try an account – reinforcing the strong loyalty to Prime member services.

Since March, consumers have been waiting for updates as Amazon was allegedly in talks with banks to launch a checking-account like product for its customers. While big U.S. banking groups have rolled out digital-only accounts, they target some of the same millennial audience that the Amazon product could also appeal to. It will be interesting to watch how this plays out. Learn more about it here.

Remembering Treliant’s Mark W. Olson: We were very sad to learn co-founding partner and retired Chairman of Treliant Mark Olson recently passed. Prior to Treliant, Mark served in senior staff Congressional roles, on the Federal Reserve Board of Governors and as Chairman of the Public Company Accounting Oversight Board (PCAOB). Mark was an exceptional leader and key stakeholder in the financial services industry. CBA’s thoughts and prayers are with Treliant and Mark’s family during this time.