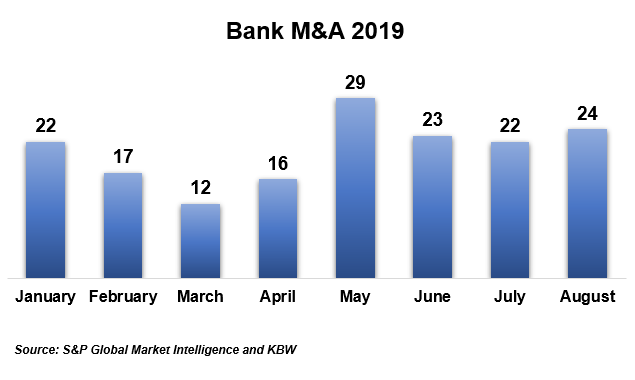 Cajun Thoughts:BNY MELLON'S CHARLES SCHARF TO LEAD WELLS FARGO Former Bank of New York Mellon Chairman & CEO Charlie W. Scharf will take over as CEO & President of Wells Fargo and become a member of the Board of Directors effective October 21, 2019. I am confident Scharf, replacing Tim Sloan who stepped down in March, will focus on culture, technology and customer's needs. His background in technology and retail banking makes him an excellent choice and we are very excited to continue our relationship with him ... MOST POWERFUL WOMEN IN BANKING Congratulations to all women featured in American Banker’s 2019 Most Powerful Women in Banking list, many of which represent our member banks! Shout out to CBA Board Member Ernie Johannson of BMO Harris Bank! … SMOKE IT IF YOU GOT IT The House voted 321-103 in favor of a bill making banking services available to legal marijuana businesses. The Senate seemed reluctant but may discuss the issue with many touting the bill as more about banking than marijuana. Senate Banking Chairman Crapo told POLITICO he wants to hold a vote on his own version by the end of the year … ONLINE BANKS GROW IN DEPOSIT MARKET Online banks, including CBA member Ally Financial, are continuing to grow and hold about 10% of U.S. deposits, according to analysis by Evercore ISI. The 10 largest banks have 48% of U.S. deposits … CFPB COURT CHALLENGE? The U.S. Supreme Court will decide next month if it will hear a challenge to the constitutionality of the Consumer Financial Protection Bureau. The court could rule the CFPB's single-director structure is unconstitutional or remove a clause that prevents the president from removing the director at will. Director Kraninger already announced she thinks it is unconstitutional … FINTECHS PARTNER WITH SMALL BANKS There’s been an uptick in fintech-small bank partnerships offering financial services, which in turn helps small banks grow and eliminates the need for fintechs to have bank charters of their own. Only two in total, Social Financial and Square, have applied for industrial loan charters … FIRST WOMEN’S BANK CHICAGO’S FIRST IN 12 YEARS A charter application for a Chicago bank that will market to women has been filed with state and federal regulators. If approved, First Women's Bank will be the first new bank in the area in 12 years!

On Thursday, members of CBA’s Home Equity Committee, led by Tom Parrish of BMO Harris Bank and Domenick Forte of Citizens, met at CBA World HQ for their annual in-person meeting.
Peter Presland-Byrne and Chante Coury of Mortgage Connect and Jim Leath and Cheryl Whitehead of Equifax presented to the Home Equity Committee on market trends for Home Equity loans and lines. Committee members discussed the removal and possible implications of the CFPB ending the QM Patch, HMDA reporting requirements and technical changes to TRID.
During the business discussion, members covered a wide range of issues including: Acquisition of customers, activation and retention of accounts, marketing strategies, customer application processes, loan processing times which are approximately 30 days for most, and the growing concern of portfolio runoff which is either increasing or flat across CBA member banks.

Senate HELP Chairman Alexander Introduces Higher Education Legislation: Yesterday, Senate Health, Education, Labor and Pensions (HELP) Committee Chairman Lamar Alexander (R-Tenn.) introduced the “Student Aid Improvement Act of 2019."
These bills fund important grant programs and make incremental improvements in areas where student borrowers are being poorly informed about federal lending programs. We hope the Chairman will go further by calling for straightforward clear disclosures for all federal borrowers, as would be required by the bipartisan Scott-Manchin Student Loan Disclosure Modernization Act. Congress must also take responsible steps to rein in federal over-lending, which is fueling skyrocketing college tuitions.
More information on the legislation is available here and CBA's recommendations for student lending reforms are available here.
HFSC Examines Debt Collection Legislation: The House Financial Services Committee held a hearing on Thursday entitled "Examining Legislation to Protect Consumers and Small Business Owners from Abusive Debt Collection Practices." The hearing featured remarks from seven witnesses on issues surrounding debt collection practices, including the CFPB's third-party debt collection proposed rule, FDCPA, student debt, time-barred debt and small business owner protections.
Key Takeaways:
CFPB Announces Additions to Executive Team: On Wednesday, the CFPB announced changes to its senior leadership team, appointing new executives in the office of Consumer Education & Engagement, Research, and Supervision, Enforcement, and Fair Lending. There's a new Sheriff in town at the CFPB named Bryan Schneider...Look below!
Bryan Schneider will serve as the Associate Director in the Supervision, Enforcement and Fair Lending Division (SEFL). Mr. Schneider most recently served as the Secretary of the Illinois Department of Financial and Professional Regulation, a cabinet-level agency. His appointment comes after shakeups in SEFL after former Policy Associate Director Resigned among controversy, and former head of enforcement, Kristen Donoghue resigned in May. The Policy Associate Director position is still vacant, and the current head of enforcement, Cara Peterson, serves in an acting capacity.
Desmond Brown will serve as the Deputy Associate Director for the Consumer Education and Engagement Division. He first joined the Bureau as a program specialist for the Office of Financial Empowerment in 2012.
Jason Brown will serve as Assistant Director for Research. Mr. Brown has 16 years of Federal service, most recently as Associate Commissioner in Office of Research, Evaluation, and Statistics at the Social Security Administration. Prior to this appointment he served in numerous capacities as an economist at the Department of the Treasury.
Karla Carnemark will serve as the Deputy Chief of Staff. Ms. Carnemark joins the Bureau with more than 20 years of experience in public service, project management and government affairs. She has worked with senior-level government executives from the U.S. Department of Defense, U.S. Department of Commerce and the U.S. Department of Transportation. Ms. Carnemark also served on Capitol Hill on the staff of Rep. Deborah Pryce (OH).
Ren Essene will serve as Chief Data Officer. Ms. Essene has served at the Bureau in a number of capacities since 2011. She previously worked at the Federal Reserve, and her career in information management and housing issues spans over 25 years.
CFPB Releases Quarterly Consumer Credit Trends Report: The CFPB released this week its latest Quarterly Consumer Credit Trends Report focused on bankruptcy filings since the Bankruptcy Abuse Prevention and Consumer Protection Act (BAPCA, 2005) was enacted. Data shows that in 2005, Chapter 7 bankruptcy filings resulting in a discharge reached a peak of close to 1.5 million nationally.
After BAPCA took effect, the number of Chapter 7 filings declined rapidly (to roughly 275,000) in 2006 but began to rise again in advance of the financial crisis. Bankruptcy filings once again peaked in 2010 at around 1,000,000 nationally, before declining again to current lows of less than 400,000 in 2018.
CFPB Director Kraninger at NIADA: On Wednesday, CFPB Director Kathy Kraninger spoke to the National Independent Automobile Dealers Association (NIADA) discussing the consumer complaint database and the Bureau’s debt collection rule. On the database,
the Director said ““We’ve done a lot of outreach and had other conversations about how we can make this better,” Kraninger said. “I believe fundamentally that things that are made public — I can’t pull that back. I don’t think that’s consistent with transparency or the way the government should operate. But putting that information in context is helpful.” Director Kraninger will also be speaking at Money 2020 at the end of the month.
INDUSTRY NEWS

Citi’s Jane Fraser Becomes CEO Prospect: Citigroup's Head of Latin American Operations Jane Fraser has been discussed as a possible CEO candidate for Wells Fargo and HSBC recently because of her background in consumer and international banking as well as strategy. Many have speculated she is a potential successor to Citi CEO Mike Corbat, however Fraser has said in interviews she does not want to be a CEO.
Chase Bank Opens Unique Harlem Branch: Chase Bank recently opened a new branch in Harlem that includes space for nonprofit events and educational outreach to the community, including career development and financial literacy classes. The bank plans to open similar branches in at least six cities over the next year, according to Chase Managing Director and CBA Board Member Reggie Chambers, with Los Angeles and Chicago as top contenders.
U.S. Bank Partners with Blend, Mortgage Pre-Approval: U.S. Bank is partnering with digital technology company and CBA Associate Member Blend to offer consumers "one-tap" mortgage pre-approvals. This new technology gives retail banks a chance to compete with Quicken Loans' Rocket Mortgage.
Regions Bank, Carvana Streamline Automobile Purchases: In conjunction with leading e-commerce platform Carvana, Regions Bank has simplified the purchase process and made it more convenient for consumers to buy and trade-in cars. The co-branded Regions and Carvana site allows consumers to purchase cars from Carvana’s inventory, trade-in value on current cars, arrange pickup/delivery options and more all from a mobile device, tablet or computer.
LAGNIAPPE
New CBA Associate Members: CBA is excited to welcome the following as new Associate Members for 2020!
Happy Birthday to Susan Faulkner: Happy Birthday to former CBA Board Member Susan Faulkner with Bank of America!
CU-Bank Purchases Set New Record: