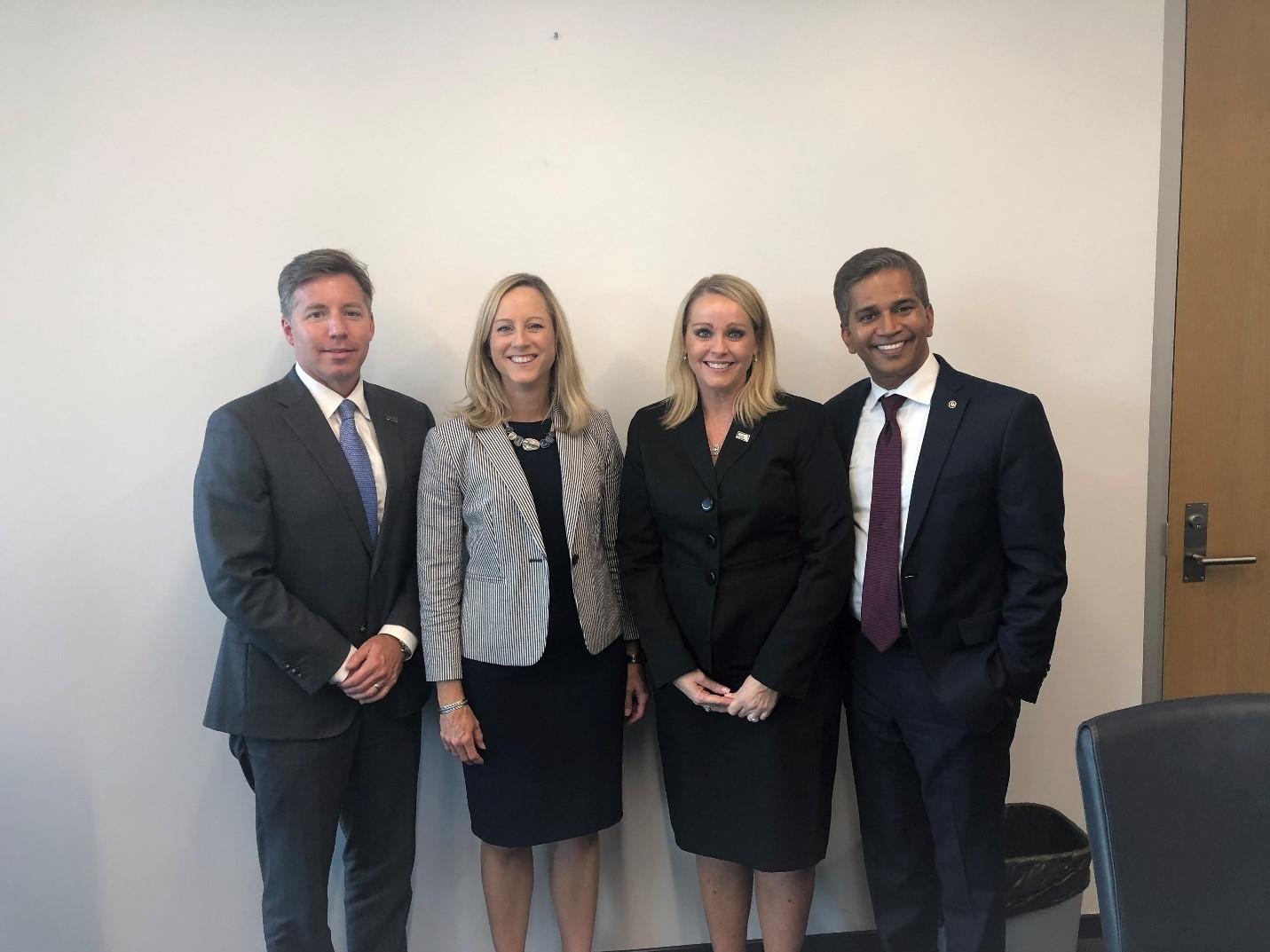 Cajun Thoughts: CBA LEADERSHIP SUMMIT NEXT WEEK CBA’s Leadership Summit will take place next Tuesday and Wednesday at CBA World HQ! CBA’s Board of Directors, Committee Chairs and Vice Chairs will meet for leadership transitions for Fiscal Year 2020, business discussion and meetings with the White House, FDIC and CFPB. Stay tuned for a recap of our meetings next week and the reveal of our 2020 priorities! … BANKS ARE HEALTHY The FDIC’s latest quarterly report demonstrates ‘another positive quarter’ for the industry with continued deposit growth, strong income and an increase in lending. As you know, the U.S. banking system is well capitalized and well regulated! CBA will continue to work with regulators and the industry to ensure balanced policies help strengthen the nation’s largest banks as well as consumer and small business access to credit … ARE YOU READY FOR SOME FOOTBALL? Football season is here and CBA might not be the first thing you think of, but the NFL and CBA both turned 100 this year. Maybe we can celebrate with a Cowboy's Super Bowl victory ... THE FIGHT OVER RATES Flattening yield curves, collapsing bond rates and faltering expectations of consumer-price increases puts constant pressure on the Fed. Fed Board Members are openly disagreeing and publicly arguing about future interest-rate cuts. Federal Reserve Bank of St. Louis President James Bullard says the economy needs a half-percentage-point rate cut, while Federal Reserve Bank of Boston President Eric Rosengren says he doesn’t see any immediate need to change interest rates … HOUSING REFORM PLAN It has been more than a decade since the financial crisis and the Administration released yesterday the first plan to take Fannie and Freddie out of conservatorship. The Administration can take steps on its own, but there are other recommendations which do require Congressional approval - chances are slim. A full summary of the Administration's plan is included below ... BB&T-SUNTRUST DEAL EXPECTED TO CLOSE SOON There is strong speculation this deal will close in early October, with analysts predicting a late December closure. The banks are waiting on approval from the Fed and the FDIC before the two can officially merge to form Truist Financial Corp. The banks will need to sell branches in order to avoid antitrust concerns about their merger! … SPICY CHICKEN SANDWICH WINNER As I am sure many of you have seen online or witnessed first-hand, there is an ongoing debate about whether Popeyes or Chick-Fil-A makes a better spicy chicken sandwich. Last weekend when I visited my hometown of Jennings, La., I was able to try the Popeyes sandwich, and I am here to settle this once and for all: While I am a loyal Chick-Fil-A fan, the Popeyes sandwich is ten times better!

Banks Report A Record Profit in Q2: The FDIC’s latest report shows ‘another positive quarter’ for the industry with continued deposit growth, strong income and an increase in lending. The U.S. banking system is well capitalized and well regulated.
The reported quarterly net income was 62.6 billion dollars, an increase of 4.1 percent from a year ago, and less than 4 percent of institutions were unprofitable. Over the past 12 months, loan balances increased by 4.5 percent, up from the 4.1 percent annual growth rate reported last quarter. Loan growth was led by commercial and industrial loans, consumer loans and residential mortgages.
The number of banks on the FDIC's "Problem Bank List" declined from 59 to 56, the lowest number of problem banks since first quarter 2007. Five new banks opened and one bank failed in the second quarter.
Overall asset quality indicators remain strong, with the net charge-off rate rising only modestly to 0.50 percent compared to 0.48 percent a year ago. Credit card balances registered the largest dollar increase in net charge-offs this quarter, increasing to 4.03 percent from 3.97 percent last quarter, but remaining well below the previous high of 13.21 percent reported in first quarter 2010. The banking industry's capacity to absorb credit losses, as measured by the industry’s reserve coverage ratio, improved from a year ago, as noncurrent loan balances decreased, and loan-loss reserves increased.
CBA will continue to work with regulators and the industry to ensure balanced policies help strengthen the nation’s largest banks as well as consumer and small business access to credit.
CBA’s full statement is available here and the FDIC Quarterly Banking Profile is available here.
Trump Administration Releases Fannie, Freddie Reform Plan: Eleven years after the federal government assumed control of Fannie Mae and Freddie Mac during a low point in the financial crisis, the Trump Administration has released a comprehensive plan to reform the housing finance giants and ideally reduce the federal government’s role in housing finance markets.
The plan released by the Treasury Department late yesterday lays out a series of recommendations for Congress and regulators to take to:
It also includes suggestions for enhanced prudential standards and a new explicit safety and soundness guarantee from Congress before releasing Fannie and Freddie from federal control.
The Trump Administration has been working on this design for three years and, while Congress does not have to approve removing Fannie and Freddie from conservatorship, a deeply divided Congress would have to approve enacting the other proposals outlined in the Administration's plan. Treasury Secretary Mnuchin, HUD Secretary Carson, and FHFA Administrator Calabria will all appear before the Senate Banking Committee next week to present their agencies’ perspectives on the plan and answer questions from Senators, many of whom have strongly held policy priorities for housing reform developed over more than ten years of stalemate. On the other side of the Capitol, House Financial Services Committee Chairwoman Maxine Waters has already criticized aspects of the plan for lacking enough affordable housing supports. These political headwinds make this report an important and necessary step towards achieving meaningful housing finance reform, but the process remains far from any conclusion.
Joint Trades Letter to HFSC, Senate Banking on Direct Deposit Through ACH: In a joint letter to House Financial Services Committee and Senate Banking Committee leadership, CBA along with several other trades commended the Direct Deposits payment system. Through the ACH, 93% of American workers receive their paychecks through direct deposit like clockwork every payday, providing a uniquely reliable way to get paid. Employees always have peace of mind knowing they will be able to access their paycheck without trips to the bank.
A copy of the letter is available here.

Fifth Third Bank CEO Greg Carmichael Leads Healing Process: After a fatal shooting at one of the bank’s Cincinnati branches last year, Fifth Third Bank CEO Greg Carmichael focused on healing and expressing gratitude to first responders in the first few weeks and has been praised for his leadership. Fifth Third donated $1 million to a Cincinnati fund set up to help the shooting victims and their families created an art campaign called #FifthThirdStrong that will be displayed in the bank's history museum.
Eastern Bank’s Non-Profit Promotes Social Equity Through Small Business: Chairman and CEO Bob Rivers of Eastern Bank recently spoke out about the bank’s decision to create the Foundation for Business Equity in 2017. According to Rivers, the non-profit addresses a gap in the net worth between white households and black households, and the bank seeks to change the perception of some minorities who view Boston as unwelcoming. Rivers plans to bridge the gap in part by diversifying the members of Eastern Bank’s board. More here.
PNC Partners with RippleNet, Joins Blockchain Network: In collaboration with RippleNet, PNC is officially the first U.S. bank to process payments using the blockchain platform. Bank officials said RippleNet will transform transactions between PNC and overseas buyers in addition to streamlining how businesses manage working capital. Learn more here.
Mechanics Bank Completes Acquisition of Rabobank: On Tuesday, the $2.1 billion merger of Mechanics and Rabobank was finalized, creating a new bank with 144 branches. Mechanics spokesman Greg Jones said the newly formed bank is “filling in the void between the large national banks and community banks.”

CBA’s State of the Week is IOWA where more than one out of every ten Hawkeye State residents banks with a CBA member! CBA members in Iowa hold $22 Billion in total assets, employ 13,000 people, provide $600 Million in small business loans and serve 400,000 customers.

With Iowa, we have now cycled through every state in the country, highlighting all the work CBA members do to finance the dreams of consumers and small businesses. If you want to revisit a specific state, check out our CBA By The Numbers page.