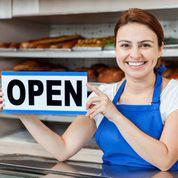 "This new ruling will create even more chaos for consumers and small banks. Congress ought to save families from this uncertainty by repealing this government mandated price-fixing. We certainly hope retailers return to their free-market principles as they did when opposing the proposed government ban on big gulp sodas in New York."

We are working with other banking trade associations to ensure a coordinated effort on this issue.
CBA held a membership call today on the impact of the U.S. District Court Ruling on debit card interchange fees.  More than 100 participants joined the discussion.
Graduate School of Retail Bank Management (GSRBM)
The 2013 GSRBM graduation ceremony was held Tuesday, recognizing the achievements of 78 seniors including our top student, the Tem Wooldridge Award winner, and eight honors graduates:

Any suggestions for a new name instead of CBA/BAI GSRBM?
Membership News
CBA's past Board of Directors Chairs held a call this week to discuss industry and regulatory developments, GSRBM and CBA LIVE 2014. Thanks to our participants for their time and continued dedication to CBA: