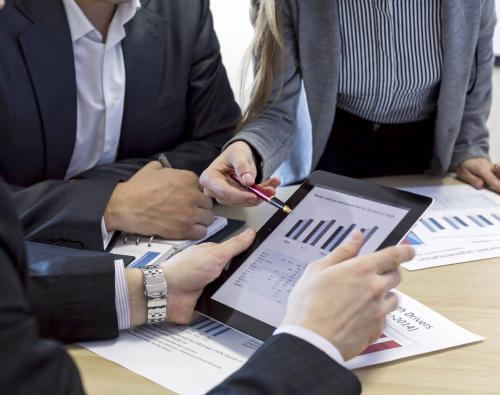 Action-Packed Week at CBA Headquarters
We had a spectacular week at CBA Headquarters with our Board of Directors and the Mid-Tier Retail Executives in Washington, D.C. On Tuesday morning, CBA's Mid-Tier Retail Executives held their in-person meeting to discuss the latest issues impacting CBA member banks with $10-50 billion in assets. That afternoon, both the Board and Mid-Tiers joined efforts to meet with 30 different lawmakers to discuss the state of retail banking, consumer choice, access to credit, data security, and CFPB governance. All in all, retail banking was certainly well represented in Washington.

On Wednesday morning, CBA's Board held its quarterly meeting, which included a thought provoking presentation from our CRA Committee Chair, Jan Woolsey (MUFG Union Bank) and Vice Chair, Jim Matthews (Capital One) and a private meeting with CFBP Director Richard Cordray. Jan and Jim raised the challenges banks face as digital transition means consumers are online with their banks rather than in line with tellers, yet regulators have yet to catch up with this new reality. Driving home the degree of change in banking, we also learned customers at one of the nation's top four banks made more deposits through ATMs than through tellers at the branch. The Director and Board covered a wide array of topics on the minds of many bankers including: TRID, small dollar lending, overdraft, arbitration, auto finance, and complaints. Among many points of view exchanged, we continue to stress there should be no carve outs for overdraft.

CFPB Publishes Unverified Narratives
This week, the CFPB doubled down on its complaint portal by pushing out 7,700 unverified, one-sided narratives. Moreover, consumers now may search for specific product names or features; specific company practices and problems; and they may do it by state. The Bureau did take one step in the right direction by seeking input on how to normalize the complaint data. We are pleased the Bureau agrees with us. However, we are profoundly disappointed the Bureau is releasing narratives to the public. In my opinion, the vast majority of banks will choose not to respond publicly, but will continue the long held tradition of speaking with their customers in confidence. Publishing unverified one-sided narratives does not benefit consumers. The CFPB prides itself on being a data-driven agency, but today's action is simply a public shaming of banks.

CFPB (again) Subject of House Hearing on Employee Discrimination and Retaliation
Around the same time the CFPB was pushing out one-sided info to the public, it was subject to a House Financial Services Subcommittee hearing on allegations of bias in its workplace. The hearing follows an American Banker story stating, "the CFPB's EEO complaints for the first half of 2015 surpassed those of three other bank regulators despite having the fewest employees. EEO complaints at the CFPB nearly tripled to 24 in fiscal year 2014 compared to 9 in 2013." Witnesses included two "whistle blowers," one a senior equal employment specialist at the office of civil rights at the CFPB, and the other the president of the National Treasury Employees Union at the CFPB, who testified the CFPB's atmosphere is "soulless" and that things have been getting worse.

Disparate Impact
On Thursday morning, the U. S. Supreme Court issued its long-awaited decision in Texas Department of Housing and Community Affairs v. The Inclusive Communities Project, Inc., the seminal case addressing whether the Fair Housing Act (FHA) encompasses "disparate impact" liability. In a 5-4 decision, the Court ruled disparate impact applies under FHA, with Justice Anthony Kennedy writing the opinion for the majority and Justices Clarence Thomas and Samuel Alito filing dissenting opinions. CBA will hold a member call on Monday, June 29, 2015 at 3 p.m. EST to discuss the implications of the Court's decision. Paul Hancock of K&L Gates will share his thoughts on the Court's ruling and what it means for the financial services industry.

Lagniappe
Citizens Financial has named Lisa Maass its president in Connecticut and Quincy Miller to be its Massachusetts president.

Pablo Sanchez, formerly of JPMorgan Chase, has been named HSBC's head of retail banking and wealth management in the U.S. and Canada.

Rohit Chopra, the former CFPB student loan ombudsman, is now a senior fellow at the Center for American Progress.

What We're Reading:
Exclusive: Banks Did Not Do Enough to Police FIFA Transactions, Says Global Agency
Congress Should Reign In Rogue CFPB
U.S. Data Hack May Be 4 Times Larger Than The Government Originally Said
Drinks. Dinner. Make a Deposit?