About the CBA OnSite Experience

Retail banking today provides consumers with more options and the experience of those on the inside has increasingly become more focused. As bankers become experts in one particular area, they also run the risk of developing a narrow view of how their institution – and the industry – operates.

CBA recognizes this view can be limiting for banking professionals and the consumers they serve. CBA's OnSite Education program equips bankers with the skills to think critically and solve problems in a manner that considers multiple business lines and support functions that could be impacted.

“Instead of making parochial decisions … you have employees that are able to look beyond,” to consider institutional consequences, shareholder interests and unexpected outcomes to customers and partners, says Mike Allen, VP of CBA OnSite Education.

CBA OnSite Education develops better retail bankers, who help strengthen financial institutions and their relationships with the customers they serve.

The training distils the essence of CBA’s exclusive curriculum into three OnSite programs, . The curriculum has traditionally been offered only through CBA Executive Banking School. Now it’s also being brought directly to banks in the same spirited, interactive fashion in which it’s delivered at the graduate program. For example, MarketSim’s state-of-the-art virtual exercises allow participants to see how customers respond to participant decisions around marketing, product segmentation and delivery as well as providing  an overview of the industry from the consumer’s perspective and teaching students how to analyze financial statements.

Stacy G. Fisher praises the quality of CBA OnSite Education and how it challenges students. “Participants have to be engaged and applying rigor to their own learning – that’s what makes it ‘sticky,’” says Fisher, who is a member of the Talent Acceleration team at Wells Fargo Bank in San Francisco. “There’s no fudging it. There’s no shortcut to understanding the fundamentals and the drivers; doing the analysis and then seeing the impact and being accountable to those results.”

She helps identify high-achieving middle and senior level leaders to participate in the program, which Wells Fargo holds six sessions of BankCom a year for about 30 people at a time. Among other benefits, the training provides an opportunity for Wells Fargo to develop its leadership and the “next generation of talent” across business lines, she says.

Fisher is also a past CBA OnSite Education participant. The program inspired her to “focus more on the retail operation and (have) a better understanding of the leaders that I now support – how they might make decisions relative to our consumer products,” says Fisher, who has been in financial services for 28 years. “It’s quite grounding in the fundamentals.” 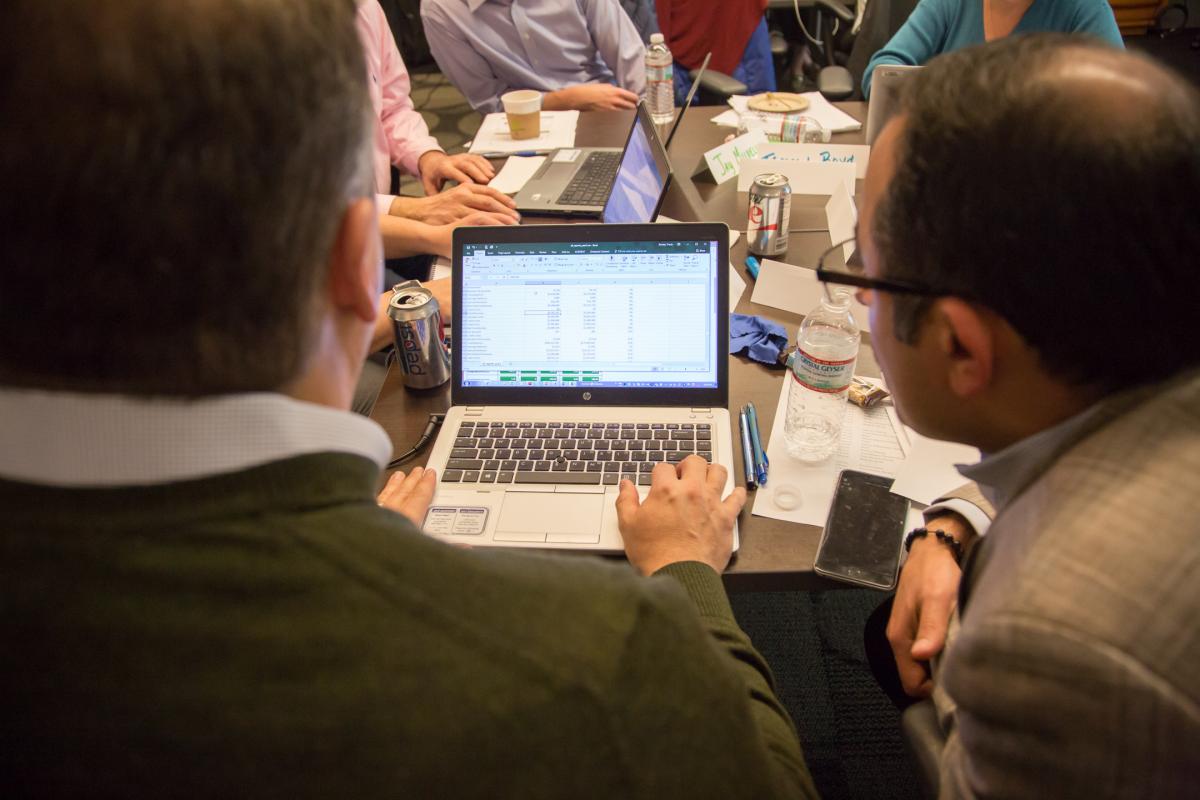 At PNC Bank for instance, the MarketSim training session is offered annually in one location with 20 to 30 participants selected from frontline and support functions among bank locations nationwide. “Leaders are considered for participation in the program based on their development plan,” for their career path, says Rebecca Rothenhoefer, Business Banking and Community Development Training Manager for PNC University in Frederick, MD.

“We want leaders to think broadly about the impact of their decisions and a post assignment helps leaders put the new skills into practice,” she says of CBA OnSite participants. “It’s an opportunity for participants to have a voice in the direction of PNC.”

Those who have engaged in the training have called it the best they’ve had and one that is immediately applicable to their jobs, Rothenhoefer says. Meanwhile, supervisors have reported observing CBA OnSite Education students think more strategically in their jobs. They’re also better able to explain to colleagues the “why” behind a decision or a new idea, which creates greater understanding and acceptance by employees.

Wells Fargo’s Fisher agrees. Through CBA OnSite Education, “we’re getting better as leaders in giving the context around why we’re making the decision,” she says. Participants from various business lines not only gain an education in the basics of retail banking; they also acquire a “better sense of the potential gravity of an unintended consequence due to the lack of critical thinking in the decision process,” Fisher says.